At the beginning of last year, when I had the opportunity to give a lecture about cloud optimisation at Nyenrode Business University, I was looking for a structure in order to clarify the journey that organisations make for the optimal utilisation of ‘the cloud’. I ended up with the famous Gartner hype cycle and split it into three generation conflicts. The fuse was lit a decade ago at the beer keg…

"It is a well-known phenomenon that during the introduction of new technology, people overestimate the benefits because they do not yet have any experience with the new technology and they underestimate the weight of the current setup, procedures and knowledge."

Approximately 12 years ago, during the weekly Friday afternoon cocktail hour at Solvinity, the debate between our Linux and Windows engineers suddenly turned into a discussion between supporters and opponents of the public cloud. The discussion became ‘OS-agnostic’, we would say today. During the cocktail hour, you held onto your viewpoint just as surely as you held your beer glass, but on the way home, you thought about the others’ arguments.
A colleague stated then that websites can run fine in the Amazon data centres, with the benefit that the customer only has to pay for the use of the IT services and no longer has to invest in its own hardware. ‘Opex instead of Capex’ as motive to switch to the public cloud. In practice, we saw a limited number of customers daring to take that step.

The term ‘Cloud hydrophobia’ was coined for this purpose. To the horror of the evangelists who are always present at every introduction of new technology, including the cloud prophecy about a substantial reduction in the total IT costs. Usually ‘substantiated’ on the basis of American super startups, of which a number (including DropBox and Snap) have decided in the meantime to leave the public cloud. ‘Unclouding’ or ‘cloud repatriation’ also occurs these days.
As solution architect at a managed hosting company, I chose for the Server Huggers party. That was mainly based on the value that we, at Solvinity, attach to security and privacy and the uncertainty that arose about the American government’s access to our customers’ data.

And just like with almost every new technology, there is then a hybrid version as temporary solution: the hybrid cloud. Some colleagues even drove a Toyota Prius in that period. The public cloud providers explained the digital gangplank. The huggers and evangelists together began their fully provided cloud cruise. We distinguished ‘workloads’ and classified sensitive data in order to make optimal use of the cloud computing strengths: fast availability and scalability.

The costs? Unfortunately, they did not decrease, but increased. It is a well-known phenomenon that during the introduction of new technology, people overestimate the benefits because they do not yet have any experience with the new technology and they underestimate the weight of the current setup, procedures and knowledge. The cloud did not turn out to be just new technology or ‘just another datacentre’, but an entirely new way of working. The optimal utilisation of this technology also then requires a consideration of the impact on the relevant processes and employees. 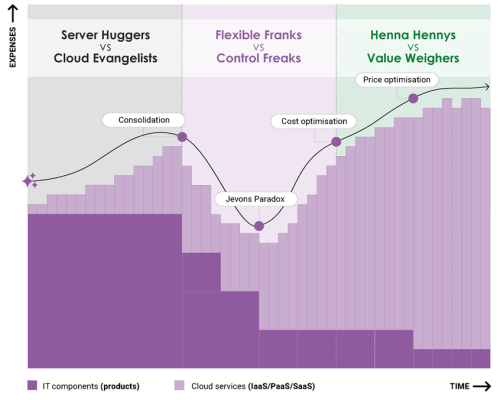 "Everyone wanted to be flexible and thought they could ‘map’ a Japanese factory, Netflix or Spotify onto their own organisation. That proved to be quite a tough task."

The Cloud Evangelists were right: the cloud did not turn out to be a ‘hype’, but a ‘game changer’. The human race apparently wanted to be unburdened through a portfolio of ‘pay-for-use’ subscriptions. These subscriptions offer more flexibility and also more time in order to work on the really important issues: your (core) business.

Software builders saw benefits in this new supply model and called it SaaS, software-as-a-service. Now everyone is pursuing a ‘SaaS first’ strategy. If you really want to distinguish yourself, then you have to develop software yourself (or have it developed) or modify a low/no-code platform.

The number of IaaS (infrastructure as a service), PaaS (platform as a service) and SaaS services exploded. The manner of working also changed in that time. The software community created the Agile Manifesto, which led to new work methods. The ‘Flexible Franks’ came into our offices with rituals in their lean outfit and supported by gurus. Everyone wanted to be flexible and thought they could ‘map’ a Japanese factory, Netflix or Spotify onto their own organisation. That proved to be quite a tough task. We discovered that conducting religious wars during pouring rain is not so practical. It is more sensible to choose the proper direction at the right time.

In the meantime, the discussion in our little world was about the difference between caring for pets versus cattle. A colleague who still dared to use a GUI in order to configure a server would have had his hands chopped off. Virtually, of course. Servers were configured using tools such as Puppet and Ansible and the parameters were properly taken from a key value database.

Cheaper? No, it was not. During the industrial revolution (1865), the English economist Jevons discovered that the more efficient use of coal led to an increase, instead of the expected decrease, in coal consumption. We also see this Jevons paradox in the use of cloud technology. The access to cloud services is so easily available that it does not lead to the envisioned cost reduction but to a cost increase. This result is amplified in situations where cloud technology is utilised in addition to the use of existing ‘traditional’ systems, when there is, for example, no capacity available to phase it out or to migrate.

And so it is possible that after an effort to consolidate and rationalise, the IT expenditures nevertheless suddenly increased again. The Flexible Franks were confronted with the ‘Control Freaks’. An interesting area of tension. All of a sudden it was about setting a quota and budgets, role-based access and the cattle had to be ‘tagged’ in order to get the situation back under control again.

"There is unrest in the world and in the Netherlands. Digital technology is viewed as a fourth power and appears to increase the distance between people rather than decrease it."

My wife uses natural henna in order to camouflage her grey hair. We no longer eat pork and I am considering leasing an electric car. Tender offers discuss climate objectives and the CO2 footprint. There is unrest in the world and in the Netherlands. Digital technology is viewed as a fourth power and appears to increase the distance between people rather than decrease it.

We realise in IT that the global (public) cloud has its disadvantage and cloud services, just like the gas supply, can become political leverage. We are talking about a ‘decentralised cloud’ and the privacy act still appears to an issue. In the meantime, the developments in AI algorithms and Biotech are moving rapidly. Facebook covered its bad image with the Meta veil and before we know it, we find ourselves somewhere on the steep slope of the Web 3.0 hype. The first prophets are already stirring.

Without judgement. Because we have to keep up. Investigate whether there are relevant developments that make our value chains more efficient and more effective and at the same time, make us commit to a better climate for our grandchildren. Remain vigilant for the use of our data by ‘free’ services and the great power of service providers who now understand us better than we do ourselves. But, for example, also utilise blockchain technology and modern programming languages that take energy use into account.

The application of cloud services, which we now call ‘cloud native’ services through the use of serverless and containers, is becoming increasingly more detailed and can be better adjusted to the value in the chain. We now no longer talk about ‘DevOps’ but about ‘BizDevSecFinOps’, which mainly says that we must work with each other in order to utilise cloud technology as optimally as possible.

"The clearer the connection between the application of (cloud) technology and the organisation’s value proposition, the better the optimisation."​

Optimisation means making something as beneficial as possible by applying the most appropriate solution. That goes further than following the recommendations from digital advisors based on a public cloud dashboard. ‘Most appropriate’ means especially taking into account the societal, business, control (security & compliance) and IT contexts. Thus we have no use for scaling down capacity when we know that marketing is launching a new campaign tomorrow. Or purchasing a SaaS service without verifying beforehand how it integrates with your IAM (Identity & Access Management) facility.

Cloud optimisation requires an integral approach The clearer the connection between the application of (cloud) technology and the organisation’s value proposition, the better the optimisation.

Would you like to exchange ideas about the optimal use of the cloud?​

Software in the cloud – from monolith to microservices

What organisational challenges can you face in the transition to flexible microservices? Fin out about the...

In all industries, innovation is about ecosystems

There is a clear shift visible within organizations towards digital ecosystems. How do you keep these...

Municipalities that outsource their ICT face major changes within their organisation. A well-guided change is usually...

With passion for IT, over 350 Solvineers take care of the availability and security of mission critical applications and sensitive data of our customers.

Receive the latest news about our services, interesting blogs, papers and articles. We like to keep you informed about:

We use these cookies to support our marketing campaigns. For example, this gives us an opportunity to remind you about us in the future through advertisements.